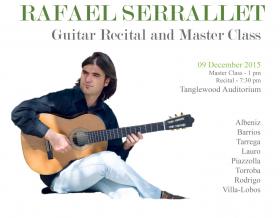 Albeniz, Barrios, Tarrega,  Lauro
Torroba, Piazzolla, Rodrigo, Villa-Lobos
Ticket: $25++
​Buy tickets online: http://tinyurl.com/rafaelrecital
Recital ticket entitles free admission to the Master Class as observer
*Master Class will be held on 09 December 2015 at 1 pm.
For registration of participants,
email events@tanglewoodmusicschool.com
Observer fee: $25
Hailed as a guitarist of profound and thoughtful artistry, Valencian guitarist Rafael Serrallet is internationally recognised as an acclaimed musician. After studying with the great Maestro Jose Tomas (Andres Segovia’s pupil and assistant), he continued his education internationally and was influenced by some of the most renowned teachers, including Leo Brower, David Russell, Roberto Aussel, Manuel Barrueco, and the Romeros. He was a fellow at the Spanish Academy in Rome, and received a doctorate in music (PhD) by the Universidad Politecnica de Valencia, and a Master of Education by the UNED.
In October 2010, Rafael was awarded with the Xirivella Prize as recognition for his international career.
Rafael’s performances have been broadcasted on radio and TV throughout Europe, Asia, and America. He has presented guitar recitals internationally, performing at significant venues such as the Carnegie Hall and Lincoln Center in New York, Liceu in Barcelona, the Maestranza in Seville, and the Lutoslawsky Hall in Warsaw.
Rafael has pioneered many social projects and leads the Iberian International Music Institute, a musical project sponsored by the Spanish Cooperation AECID, the Spanish Ministry of Culture and the Valencian Government, established to foster and develop music education in different parts of the world.
​Programme